On Friday, we held an escape room at the library. This was the first activity that I planned during my internship, and it turned out great. The escape room theme was crazy librarian, so there were cat pictures hung everywhere, and her desk was a mess.

How it worked was we gave the kids one hour to open a locked box with a prize inside. To get the key for the box, they had to use the clues in three smaller locked boxes. And then everyone had to look around the library and her desk for the combinations to the three small boxes. It was hard to judge how hard some things would be for them to figure out, so we gave them three chances to ask for a clue from Ashley and me. When they couldn’t solve the puzzle, they would split up so a few would look around for the next puzzle and a few would keep working on it. Sometimes, the group would bypass the first puzzle and find the next one without the clue that the first one would have provided. They were so close to getting the prize out of the box within the hour. They only went 30 seconds over so we let them have the candy anyway. 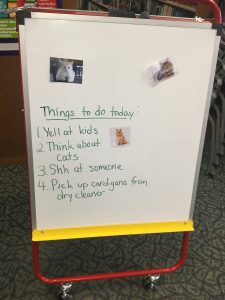